Day 2: Manirang base camp to advance base camp

Manirang Pass is a high and extremely challenging pass. It connects Kinnaur to Spiti valley of Himachal Pradesh. The route from Mane to the pass is fairly straightforward, as it is well-trodden by a number of teams trying to attempt the Manirang peak.  If you are well-acclimatized one can reach the base of the pass in a day and cross it on the 2nd day.

One slip in these landslide areas may result in one going straight down into the raging river (a good 60-70M below).  One also has to cross the Sumdo Nala from its true right to its true left bank. The river crossing is fairly tough as well. Once on the true left bank, the route traverses across a rocky valley side high above the river.

In a lot of the places, the trail (on the true left bank) is hardly visible and often landslide ridden and very dangerous.  One has to have very high concentration while walking this trail.  To compound matters, the camping spots (from the base of the pass on the Kinnaur side till Ropa village) are very few and even those do not have clean water close by (the water in the Nala would be muddy).

The 2 ideal places for camping are at the base of the pass and another at the confluence of Rakholbang Nalang Gad(rivulet) and Sumdo Nala.

This is a challenging pass and a dangerous one. In case you attempt to cross the pass from the Ropa valley side, the route from the base of the pass to the Manirang pass is not very obvious.

An organized trek (with additional staff & technical equipment – rope/ice-axes) will not reduce the risk while crossing some of the landslide ridden stretches and tracks.

PS: The recommendation is my view based on the trekking conditions that I observed and my understanding of the common trekking fraternity in India.  This is not meant to discourage any trekkers (or commercial trekking agencies) from attempting this pass.

On the 2nd of August,  We took a bus from Mud to Mane village.  We got off the bus heading to Reckong Peo from Kaza, at a point on the Hindustan-Tibet road closest to Mane, crossed the bridge over Spiti river, and ascended for about half an hour on a fairly steep slope to reach the quaint village of Mane.

We had replenished most of our rations at Mud and the remaining we could replenish at Mane.

Mane is a fairly large village.  It has 2 shops to get rations from, where we purchased the pending items for our replenishment.  1 guesthouse is being opened (Nizer).  For those wanting a local guide to do this trek you can ask for “S Dorje”.  After lunch in Mane, courtesy of the owner of the upcoming Nizer guesthouse, we started off after noon,  walked along a fairly well-marked trail, crossing a drying lake (Yang Tso ??) and then along the Mor Nala till we reached a spot, which served as a basecamp (~4575M) for a team climbing the Manirang Peak.  There were about 8 members of the team camped here.  It was late evening, around 5:30 p.m when we camped.

Mor Nala to Advance Base Camp

On the 3rd of August,  We started around 8:30 a.m and continued along the Mor Nala soon crossing it to its true left.  After a brief stopover for consuming our packed lunch, we continued, and soon reached the spot where camp 1 had been established by the team attempting to climb Manirang peak.  We continued till we reached camp2, which was ~100M below the pass at an altitude of ~5450 M.  We reached the camp around 1 p.m.  However, the weather had gotten bad, with whiteout conditions, resultant low visibility, and mild snowfall.  So, we decided to camp along with the 5 mountaineers (and their staff).

4th Aug: On account of the early morning whiteout conditions, which took some time clearing, we broke camp around 8:30 a.m.  We traversed the scree slopes on the side while approaching the pass.  As that was difficult, I decided to cross a snow patch. It was a thin layer of snow, so one had to be careful traversing it.

I was nearly at the end of the snow patch and had about 4 feet (left) before I got onto the scree slope.  However, this last stretch was semi-hard ice, and in all likelihood would cause me to slip and fall.  I did try for a minute to create a step on this.  However, when I stepped onto it I slipped, as expected, and went down about 60-80 feet along a half foot deep ice “Nala”.

Since I had my wits about me, I slid on my back, (with the backpack protecting me).  I did try to break the speed of my fall using my right elbow.  That caused some bruising (skin peeling off) on my right elbow  Besides that I was okay.

I asked my friend, who had reached the top of the Manirang pass (I was about 20 -30m below the pass when I fell), to retrieve my stick which slipped out of my hand during the fall.

Having heard my shouts he was slightly alarmed and when he went to retrieve my stick he had to cross a similar snow patch. While crossing the snow patch, sans backpack, he too slipped and fell, nearly to the same place where I had fallen.

Both of us then trudged our way, through another less slippery route, through shale (one which we should have taken in the first place) to reach the pass.  From the Manirang pass, we could see the mountaineering group – they were almost at the same elevation and they shouted out to us on the successful reaching of the pass (probably they heard my shouts and were pausing to see if I was okay).

After a quick “Patti” (bandage) to my bruised arm, we were on our way down the other side of the pass.  The descent on loose rock, shale on the true left of the Nala, from the pass, which feeds into Sumdo Nala,  is steep & treacherous.  We carefully negotiated the steep descent & celebrated it with a break for lunch & an empty shepherd encampment.

It was a beautiful place with hanging glaciers interspersing the barren mountains.  We were hoping for a better route ahead.  After lunch, as we walked along the true left of the Sumdo Nala we realized how mistaken we were in our expectation for a better route. There was hardly any route/track to speak of.  The sides of the deep valley alongside the Sumdo Nala had been completely wiped away with landslides.  One has to traverse through these landslides.   The ground was pretty hard (not even shale/scree) and did not offer any proper grip/footing.  One slip and a person can easily slide down to the raging Sumdo  Nala 60-70M below.

It was getting into the late evening as we traversed such routes and we had to soon find a camping spot.  We could see across the Nala, what seemed like shepherd encampments but one had to cross the raging Sumdo Nala, and as per the map, there was no water source.

Somehow, we slithered our way down to the banks of the Sumdo Nala.  There was just one spot where the Nala seemed a bit wider, and hence less turbulent.  We stripped down to our underwear, held hands, mustered courage, and crossed the Nala,  For a couple of steps in between the water came up to our waist and the force was really strong.  We barely lifted our feet while crossing the Nala to prevent us from being pushed into the water.

We got out of our wet clothes once we crossed the other side and again walked up the landslide for 60-70M till we reached a track amidst a grassland.  It was late in the evening and the last rays of light were quickly fading.

We were both exhausted.  While I pitched the tent, my friend who had scouted the area for water to no avail, went back down to the Nala and filled the muddy water from the Sumdo Nala, and returned. After filtering the water the best we could, we made our dinner, before a well-deserved rest.

5th Aug:  We started once the slight morning drizzle eased off.  After about 30 mins of walking, we came across a shepherd from Ropa village.  He had been there for 53 days now, alone, and he said that there was possibly just 1 more shepherd along the way to Ropa. He had some tea/coffee made of fresh goat milk.  Luckily, he had antiseptic and bandage and a number of other medicines with him (given to him from the dispensary from Giabong village.

I used that to clean and bandage my wound properly.  We then descended to the confluence of Sumdo Nala and Rakholbangnala gad, where we halted for lunch.  Post lunch we crossed the Rakholbangnala Gad, over a shepherds bridge & ascended high above the true left bank of the Gad, amidst pouring rain, which relented in about an hour.  Beyond this, there is no campsite, till one reaches Phopian Thatang.

Even at Phophia Thatang, clean water was only available at a small dugout in the ground (along the track) about 50M below the campsite.  Based on inputs from the shepherd we had filled water from here along the way.  Even in Phophia Thatang, there is just enough space (flat ground) to pitch one or 2 tents.  We pitched camp here as it was late evening by the time we arrived at Phophia Thatang.

The route, where it is visible, from Rakholbangnala gad to Phophia Thatang traverses the steep rocky valleys on the true left and is landslide ridden.  It is slightly less dangerous than the previous day — though my companion did not think so — as the extent of each landslide was not as big as the previous day.

Looking back from Phophian Thatang we could see the ridges that we crossed all the way to the pass. We could scarcely believe ourselves that we had indeed crossed this path.  One can also see the Ropa Gad(rivulet), and the path to the Ghunsarang pass is along with this Ropa Gad.  As per some locals from Ropa, the path to Ghunsarang pass is less dangerous than the path to Manirang, albeit a bit long.   However, based on what we saw from Phopian Thatang I would not bet my life on it :).

As per the locals, it would take about 5 days to cross to Mane village via Ghunsarang and 3 days via Manirang pass route.

6th Aug:  In a leisurely 2-3 hours walk we reached Ropa village by 11 a.m.  This was the 5th day of the trek & we had approximately taken 4 days (given we started afternoon from Mane on 2nd Aug).

Given the nature of the route, the weather conditions & given the fact that we were doing this trek alpine-style we felt pretty satisfied having completed the trek in this duration.  From Ropa we hitched a ride to Giabong. Giabong village has a dispensary (where I further dressed my wound) and places to eat.  Ropa does not have any proper hotel.  From Giabang we took a bus to Reckong Peo.

Other Notes: From Giabong village, we contemplated whether we should trek to Lippa village in a couple of days.  The locals said that en route there is a lake where Pandavas were supposed to have stayed & is a beautiful camping spot.  Going to Lippa would have completed a nice circuit trek.  However, due to various factors, I decided against it. 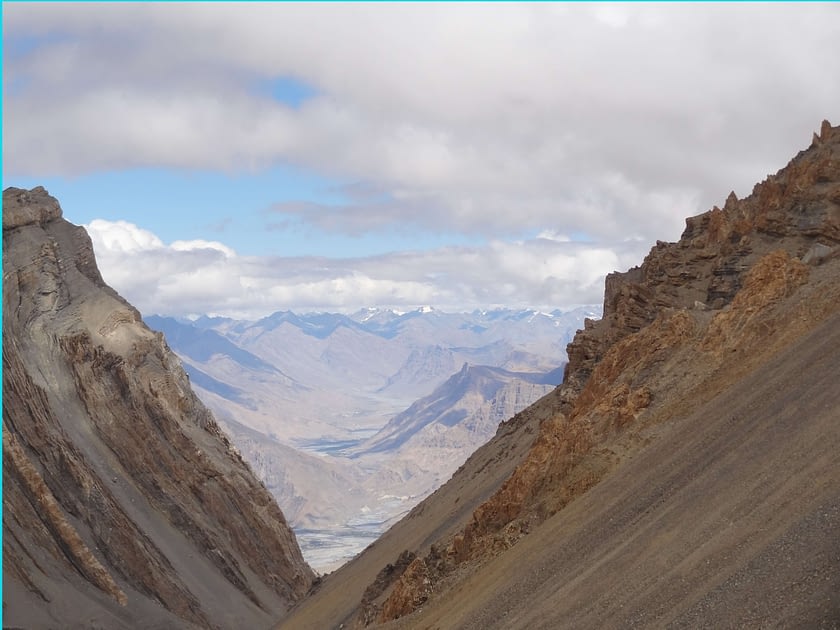