Baspa River originates near the Indo-Tibetan and Himachal-Uttarakhand border. The valley of Baspa is named after this river. It is also known as the Sangla Valley – one of the most scenic valleys in the Himachal Pradesh. The Chung Sakhago Pass lies at the head of the valley. Baspa river is fed by the perennial Chung Sakhago glacier and shares the catchment area with a tributary of the Bhagirathi river, Uttarakhand.

From Nithal Thach to Baspa glacier

After a cakewalk on the first two days, we geared up for adventurous things lying ahead for us. With extreme cold conditions leading to dry skin, some wheatish faces in our group had started changing to white faces coated with layers of sunscreens by the start of day 3.

After a 2km walk from our campsite, we arrived at the Karu Devta temple. Karu Devta is the presiding deity of Dumti. A small Shivling and Karu devta is present in this temple.

Happy ji was telling us that even ITBP had been following the traditions and practices of locals to offer a prasad in this temple every morning before starting to cook for that day. He added that if any villager is taking his goat or sheep beyond this point, the villager would sacrifice one of his goats/sheep here before proceeding further.

The trail beyond Dumti had given us some wallpaper views, however, the reality hit me as we stepped into the rocky trails. A mild pain had started in my ankle after we crossed the flat surfaces and started walking into the rock patches. However, it was very mild pain and I was confident of finishing off the day’s walk and was hoping for late-night magic for much steeper ascents waiting for us near the Lamkhaga pass trek.

We came across herds of thick-skinned cows chilling out and grazing in the valleys of snow-capped peaks. The cows that had been left near Nagasthi had traveled to this point.

Happy ji was telling us that the thick-skinned cows cannot survive the slightly hot weather after winters, hence it’s left to graze on its own in the high hills for 3 to 4 months.

He added that the villagers manage their living with one cow for a few months till the winter and would go on search of the herd during the beginning of winter. It was interesting to hear from him that no wild animals roamed in this part of Kinnaur and the herd of cows left to graze here would usually be found in its full count by the villagers.

We were also joined in the trail by ITBP jawans who had to camp at Nithal tach. The ITBP jawans were reminding us every now and then to hydrate ourselves, protect ourselves with the monkeys’ caps instead of exposing our ears to the heavy winds of these hills in our yet another long walk along the river. And, there started the second round of conversations with ITBP jawans.

From current affairs to experience in the Indian army, we had talked about almost everything that had flashed into our minds then. Then the conversation drifted to Gundar Nala crossing that lay ahead of Nithal Tach. ITBP jawans passed us some energy drinks to us and we had stopped for a short break. The commander of Dumti started describing how the ITBP personnel crosses the Gundar Nala if the situation demands them to do so. He said every time when someone in ITBP needed to reach Gundar, they would apply mustard oil all over their body, walk through the super cold waters and then cross it as the water level may sometimes even reach their shoulders.

With our trek happening in the last week of May, he added that we might just get a little lucky as water levels may not be that high in May. Having had a long break here, it was time to move ahead.

After a walk of a few minutes, the Yamrang peaks were just in front of us. After an uneven patch, we had finally come down to the valley and the flat river beds greeted us. Time just flew away as we walked along the river bed hearing out the adventures of few ITBP jawans.

It started to snow as we were just a few minutes behind Nithal. Few of us moving in the mountain trail with ITBP could see the dwarfed figures of the rest of our trek group crossing the Dumti meadows from a slightly higher inclination. Nature keeps reminding us that humans and their problems are so tiny in front of Mother Nature. However, despite our tiny size, we, humans continue to use too many of our natural resources at an alarming pace ignoring the warning signs from every other natural disaster.

Cheerfully schlepping our groceries, tents and sleeping bags, few porters got past us in the mild snow as they had to rush through and set up the campsite before the weather becomes worse.

Camping in high hills, far far away from the human habitation and yet experiencing the luxury of tasty cooked food and some good sleep in thick sleeping bags/tents is an inevitable dream without the support of the porters, who carry heavy loads of groceries and other items just for a few hundred rupees a day. The physical support provided by the porters to fulfill the dreams of a few trekkers despite the challenging weather conditions is often overlooked. They are the indisputable guardian angels of a mountain expedition.

Our trek group had our lunch amidst the mild snow in Nithal, while Sonu Negi ji was helping the porters cross the river beyond Nithal. It was the same sight that the commander of Dumti had described us. From the top, we could see the porters removing their layers and crossing the river with the luggage on top of their heads.Just after the snow intensified, the commander of Dumti came to us and announced that they have worked out a jugaad for us to cross the river. As he had to immediately head back to Dumti, we bid him goodbye with some final handshakes and wondered what was in store at the river crossing.

Luckily, the water levels in the spot chosen for us to cross the Gundar nala wasn’t that high as we had imagined. After hopping through a stretch of rocks and crossing a proper bridge, we were standing in front of the two more water crossing points.

Water was flowing in its full force. Happy ji and some more support staff brought a ladder and positioned it for us to cross the river. We realized this was the jugaad that the commander of Dumti had mentioned to us back in Nithal.

With the ladder in its position, it was time for an initial load test. Happy ji and a support staff hopped and jumped crazily over the ladder to check if it could withstand our weight. Chetan Phalke from our group captured a small part of Happy ji’s crazy hoping to reach the other side.

Then, it was our time to cross the river with the ladders. With the first one done with ease, we had one more water crossing lying ahead.

There hasn’t been a day that has passed without me lamenting to people on my inability to put on weight despite my hearty appetite. However, my less weight proves to be a great blessing when it comes to climbing or jumping over boulders and rocks. This time a river crossing with a ladder was done and dusted with ease :)

After the river crossing and some slow walk along with the uneven patches, we finally arrived at the Gundar campsite. The ankle pain had intensified on the third day and reduced my pace. After campfire and a tasty dinner, it was time to hit the bed.

In every walk of nature, we receive far more than what we seek. We have blessed with some mesmerizing views of snow-peaked mountains as we hopped over some more rocks to cross the rivers.

The trails had turned uneven after Nithal and we came to a screeching halt near the Baspa river crossing, about 2 km from Gundar. We had to cross the river to get to the other side and about 3 feet of water was flowing in its full force. A walk in the super cold water was on the cards.

First Gautham ji and Kohinoor removed off some of their layers and went to the other side. Then, Happy and Rajeev along with three of us held each other’s hands and we formed a chain and crossed the river. Thanks to the lovely capture by Gautham ji (view video in above FB post), this memory (me, Chetan and Hiren crossing Baspa river) is as fresh as it just happened yesterday.

After some hiking beyond the Baspa glacier, we had finally reached the lower basecamp of Lamkhaga pass by 12 noon.

After a long halt of lunch and some tutorials from Happy and Rajeev on snow sliding, we moved further ahead. With a major part of the day still left, it was indeed a sensible decision to skip camping in the lower basecamp and go further ahead. The path beyond Baspa glacier has been steep and the path ahead wasn’t going to be an easy hike.

With the legs washing off my pain killers, my legs literally went on a toss walking over the rocks and uneven surface. The treacherous uphill climb was like adding fuel to fire to an exhausted and injured ankle.

But I wasn’t the only one doing the zombie walk. Almost the entire group had become tired few meters up. It was like a never-ending hike.

All of us in the group had become completely exhausted. We were counting our steps and taking a break after every 30 to 50 steps. We had been walking, and walking.. and walking.. but the campsite was nowhere near sight. The thought of hiking up with an injured ankle is always easier said than done. With ankle pain turning deadly with every step, I was unsure if I could even make it to the campsite and just hoped I don’t crash or faint somewhere in the snow. 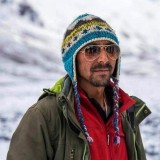