The region is hemmed in by Indo-Tibetan border and peaks of Zanskar and Greater Himalayan range on its north-eastern side. Dhauladhar range seperate it from Uttarakhand on the southern side .

The cultural and traditional practices of Kinnaur are heavily influenced by Tibetan Buddhism and the trek is a great opportunity to witness the beautiful confluence of Hinduism and Buddhism.

The Journey To Kailasha Of Kinnaur

The schedule of Kinner Kailash Yatra of Kinnaur is fixed by the office of deputy commissioner office Reckong Peo.

Kinnaur Kailash Yatra is usually scheduled for the 3rd week of July month or the first week of August month, but Parikrama of Kinnaur Kailash is doable in the month of May and June also. Before departing, Local tour operators — registered at tourism department, DC office Kinnaur — are mandated to submit the list of trekkers planning to hike the Kailash route at nearest police station.

The route to the Kailash summit is steeply inclined, and it gets almost perpendicular just after Tangling village. It takes around 8-9 hours from Tangling village to reach the next pit stop i.e Maling Khata meadows.

The Yatra or pilgrimage to the Kinnaur’s holy Shivling is unlike the Shrikhand Mahadev or Manimahesh Kailash where the route ascends gently in zigzag fashion.

Our Kinner Kailash Parikrama departures are scheduled for the second week of June and the first week of September. We are looking for a minimum group size of 6 people.

We also can run tailor-made trips for smaller group sizes (i.e. less than 6 people) who are willing to sustain an additional price. The trek dates are subjected to the notifications and the pandemic guidelines released by Kinnaur district administration.

There are three routes to reach the apex point of Kinnaur Kailash Shivling trail.

All three trails passes through villages, apple orchards, vineyards (Ribba is renowned for grape cultivation and Angoori — the grape wine).

The Tangling-Maling Khata-Gufa trail is a quintessential ascent.
After the Tangling village — the last point of civilization — there is an 8-9 hours of sheer climb through dense forests of Fir and Juniper trees till Government Sarai (Shelter).

Most people discontinue their hike at or nearby Sarai, camp on the meadows, and stop for the night halt. If you hold up there through the night, start early in the morning as you need to cover the remaining boulder-ridden terrain — which is the most difficult part of the Kinner Kailash Yatra trail — and descend back to the base.

If you manage to reach the Gufa (a big cave shelter that serve as a base camp for Kailash Yatra pilgrims) milestone on the same day, the climb will be less straining on the body as you get more time to take a breather — which you must take frequently considering the thin air and imposing boulders blocking the route.

The Ribba-Bato Kanda route to Kinner Kailash is a shorter and less (than Tangling-Gufa route) demanding. The trail gradually ascents from Ribba village and meet the Tangling-Gufa trail near Parvati Kund.

The Purbani-Kinnaur Kailash route is the least trodden one. It is used mostly by the shepherds.

What Is The History Behind The Kinners Of Kinnaur?

The history and origin of the word Kinner — with respect to the people of Kinnaur — is still debatable. Kinners of Kinnaur finds mentions in all religious and mythology texts — except Rig Veda — like Rajtaringini, Amarkosha, Matsya Purana, Ramayan, Mahabharata, Shiv Purana, and Vishnu Purana.

In this anthology of epics, Kinners are revered as a distinct tribe who are demi-gods — partway between men and gods.

The celebrated poet and sage Kalidasa has written extensively about the Kinner people of Kinnaur. In Meghdoot — a masterpiece in Sanskrit literature — Kalidasa has described Kinners as pretty people with mellifluous voices who sung and danced at Lord Kuber’s royal court.

Following the June 2019 incident that occurred near Parvati Kund, the Kinnaur district administration under Himachal Pradesh Miscellaneous Adventure Activities Rules 2017 has mandated the permit for every trekker wishing to register for the Kinner Kailash Yatra.

As per Himachal Pradesh Miscellaneous Adventure Activities Rules, 2017 any trekking activity in the district has to be carried out with prior permission from the tourism office and camping permission of the trek is to be obtained from the forest department.

Parikrama(circuit) is the rite of circumambulating — called Pradakshina in Sanskrit — in a clockwise direction of religious images/symbols. It is an integral part of Hindu and Buddhist religious practices.

What Is Kinner Kailash Trek Cost?

Kinner Kailash trek (circuit) price starts from 20,000 INR. A multitude of variables will influence the final price, including group size, pick-up location (Chandigarh or Shimla), departure date (pre-monsoon in June or post-monsoon in September), and add-ons such as backpack offloading, gear (crampons or gaiters), accommodations before and after the trek, and drop-off location (Shimla or Chandigarh). Shoot us an email if you’re interested in group or early bird discounts. The cost of the Kinnaur Kailash Shivling trek will be determined by the same variables.

The landscape of the area varies from the lush green scenic valley of Sangla to the snow-clad mountains of the Kinner ranges. This trek is packed not only with some of the best views of the mountains, but also provides an insight into the rich history of trade, religion, and diverse ethnic groups, the experience of which leaves one enchanted.

Village walk and a visit to Rangrik monastery and last ITBP post on the Indo-Tibetan border. Explore the places around Charang and pay a visit to the Rangrik Monastery. Overnight stay in the village homestay or camping.

Today we trek from Charang to Lalanti. Initially, the climb will be steep for 2-3 hours till we reach Charang Kanda. After reaching the Kanda gradient is low till Lalanti. Lalanti is a place with many wildflowers and beautiful meadows. The place is beautiful with flowers and blue sky and the roaring sound of rivers. Camp for the night beside a stream in Lalanti.

Trek to the base camp of Charang La today. The climb is relatively steep today and we will reach the base camp by evening. Dinner and overnight stay in tents.

Today we start early and climb steeply to Charang La. The view of the Kinnaur range is spectacular from this point. We pass Charang La and descend down to Chitkul village. Overnight stay in the village.

Chitkul is the last village on the Indo-Tibet border. We can explore the places around Chitkul like Nagasti ITBP post and Ranikanda meadows. Drive back from Shimla with a bag full of lifetime memories. 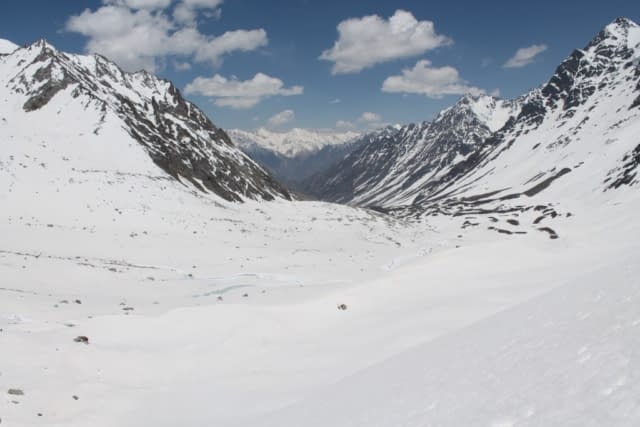 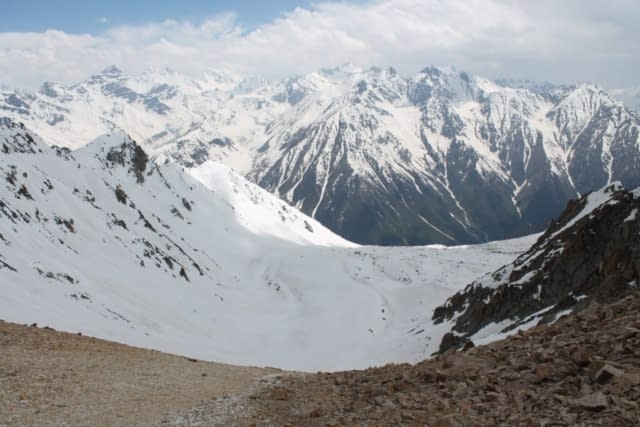 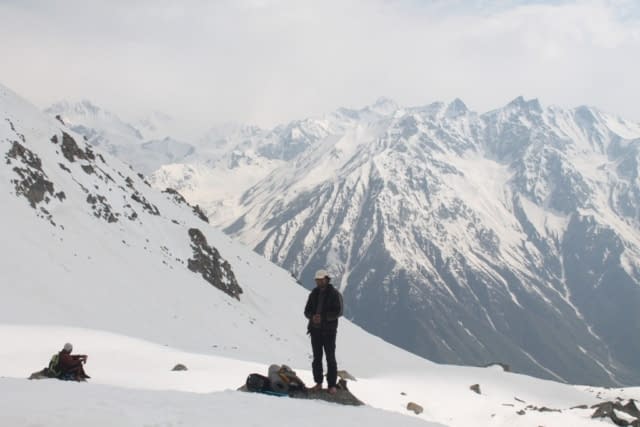 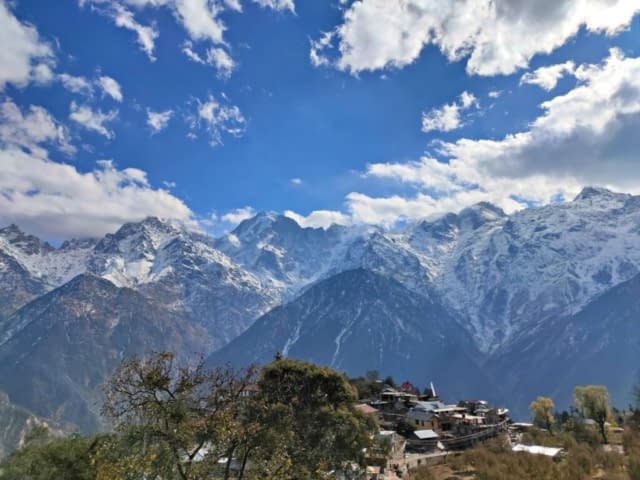 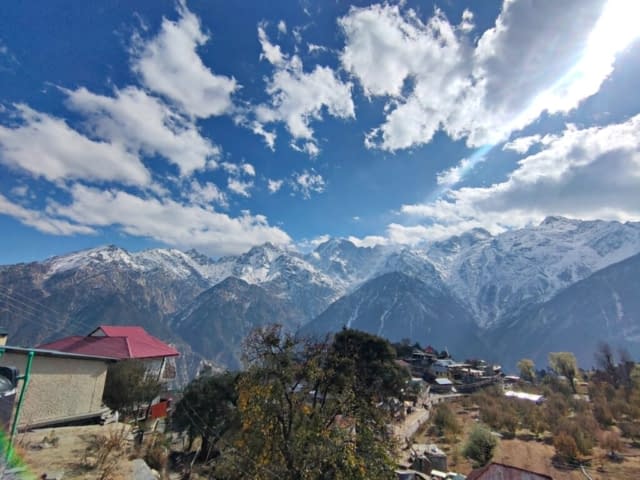 Besides good planning, logistics, food, and good equipment, packing a backpack and carrying essential things play a key role in the success of an expedition.

You must have done at least one high altitude trek before. Those who do not have the requisite trek experience of high altitude passes should not apply.

You must be physically fit to do the 4-day Himalayan trek. The Kinnaur Kailash circuit trek leads you up to 17,400 feet high pass of Charang-La and through a long expanse of Charang-La glacier.

At this altitude, the air is thin and the rigors of the mountain can grind you down. You must give yourself sufficient time to prepare yourself for the trek.

NOTE: Trekkers are required to bring a medical certificate deeming them fit for high-altitude trekking at the start of the trek.

Backpack carrying: A porter will carry your backpack, please do not bring extra items but only the essentials needed for high altitude trek. Besides detailed planning, taking care of all the logistics, food, and good equipment, packing a backpack efficiently and carrying essential things play a key role in the success of an expedition.

c Expand All C Collapse All
a

How to reach Kinner Kailash?

First you need to reach Reckong Peo, the administrative HQ of Kinnaur district. You can take any one of the three routes from Reckong Peo.

What is Kinner Kailash?

Kinner Kailash (6050m) is a holy peak towering over the Kalpa (called Sairag by the people of Kinnaur) valley of Kinnaur. You must have previous climbing/mountaineering experience to reach the apex of Kinner Kailash peak. However, the trek to Shivling pillar, located below the 6050m high Kinnaur Kailash peak, is doable (not recommended) even if you have no prior trekking experience.

What is best time to go for the Kinnaur Kailash trek?

The yatra dates of Kinnaur Kailash are officially announced (for a period of 4-5 weeks) by Kinner Kailash Yatra committee after consultation with the local administration. One can’t go for yatra before or after the time window approved by the administration.

However, the Kinnaur Kaliash Parikrama (circuit) trek is doable from May-September month period.

Why is it called Kinner Kailash?

Kinner Kailash peak is named after the Kinner tribe — the people of Kinnaur. There are many mythological connotations attached to the word ‘Kinner’. You would find a mention of ‘Kinners’ in almost all major Hindu religious texts and epics. In these texts, the Kinners are described as a tribe of great singers and dancers living in the Himalayas.

Artists of India and central Asia made sculptures of the Kinner tribe during the ancient and early medieval period. Cave 1 of Ajanta caves is dedicated to the Kinners. During this period the Kinner tribe was spread from Bhagirathi valley of Uttarakhand in the east to the source of Chandrabhaga river in the west.